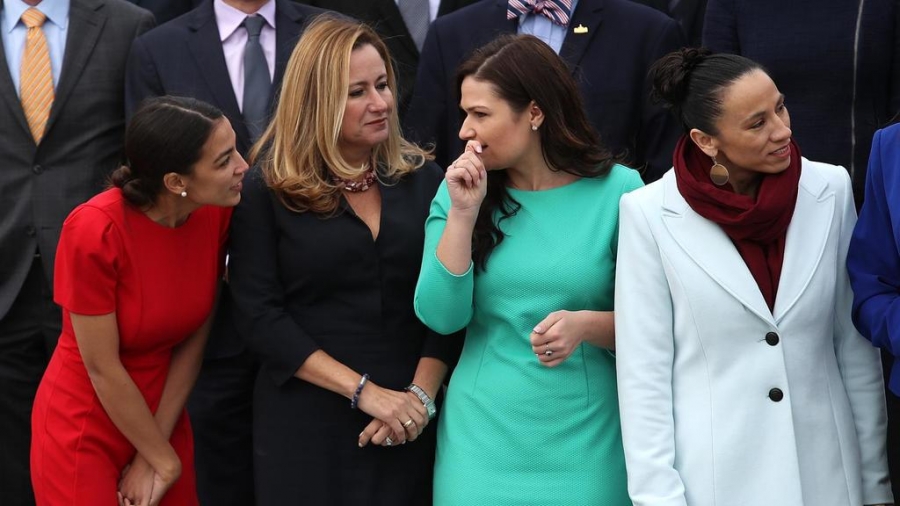 This year, we continue playing a central role in our own future, being an element of hope in creating a nation that has a more inclusive and representative democracy, and that reflects the diversity and priorities of all communities.

Representatives-elect Alexandria Ocasio-Cortez, Debbie Mucarsel-Powell, Abby Finkenauer, and Sharice Davids join with other newly elected members of the House of Representatives for an official class photo of new House members at the U.S. Capitol on November 14, 2018 in Washington, DC.Crédito: Win McNamee/Getty Images

The last two years have represented a constant attack on the Latino community, immigrants and minorities by Trump. Structurally, we have been the focus of aggression and exclusion in all types of public policy decisions by this administration, which has an impact on our quality of life in the short and long term. The constant use of Trump’s negative rhetoric against our community has also led to a drastic 24% increase in hate crimesagainst Latinos over the past two years.

However, these attacks, instead of weakening us, have strengthened and united us as a community. Here are 6 examples of how Latinos and immigrants are organizing, and therefore strengthening our democracy:

The central response of our community to these attacks has been civic participation. Latinos have been playing an increasingly important role in national and local elections. There are 57 million Latinos in the United States, of whom 29 million are eligible to vote. Latinos participated more in the elections of 2018 than in any other midterm election, and it is estimated that 27% of those voters went to the polls for the first time. The most recent projections are highly positive, anticipating that there will be an estimated 32 million Latinos eligible to vote in the elections of 2020, making Latinos the second most important group in the country and thus a decisive constituency.

These results were obtained thanks to the exhaustive work of thousands of people and organizations throughout the country who have believed in the importance of our vote. This has been reflected in the increase of voter registration programs, get out the vote, voter education, and programs to promote citizenship and the fight against voter suppression.

We have also said enough to the lack of representation and exclusion of our community from public office. We have seen a significant increase in the number of Latinos and Latinas who have run for public office at all levels and across the country. The results of the last elections are a clear example of this. We now have 43 Latinos elected to Congress in Washington DC, the highest number of Latino legislators in the Capitol in the history of our nation. Nationally, the figures are also promising, with 6,600 Latinos elected, an increase of 10% since 2013.

The 2018 elections made it clear that women have also been part of the reaction to Trump’s divisive discourse. Congress in Washington now has more women, more youth, and is more diverse than ever. The number of Latinas in positions of power has increased exponentially, with 2,401 Latinas elected, a figure that translates to 36% of the total number of Latinos elected nationwide.

3. Contributions and Incentives to the Economy

One of Trump’s anti-immigrant arguments has been that undocumented workers come to steal jobs, commit crimes and live off public assistance. Nothing is further from the truth. As a country, we have an addiction to cheap labor and as a result we have created a perfect system that revolves around the exploitation of undocumented workers. There are entire sectors of the economy that depend on them and their contributions: 53% agriculture, 15% construction, 9% production, 9% services, 6% transportation, and 5% of the total workforce.

In the same way, immigrants are central for the national economic growth and the creation of jobs. Immigrants pay more than $300 billion in taxes per year; undocumented workers contribute $24 billion in federal taxes as well as $11 billion in property taxes, along with local and state taxes. Also, undocumented workers contribute $15 billion a year to social security, which represents an important subsidy since they do not have access to those benefits.

In addition to being an essential pillar for the stability and economy of the country, Latinos are the group that creates the largest amount of small businesses. There are around 5 million Latino-owned businesses. While the number of businesses in the country declined from 2007 to 2012, the number of Latino businesses increased by 46%, and it is estimated that Latinos contribute $2.13 billion, which represents 11.8% of GDP, and ultimately shows that we are central to the economic growth of our nation.

Unfortunately, Latino workers continue to be the most vulnerable in the country, particularly undocumented workers, who suffer the highest number of deaths and accidents at work, the highest wage theft, and sadly an increase in sexual harassment in the workplace. As a result of this landscape, Latinos and immigrants have been a central part of national mobilizations and the organization of workers to improve labor rights in the country. For example, the car washers, the day laborers, the farmworkers, the domestic workers, the national movements of service workers and restaurants, and the TimesUp movement among others, have played a central role in advancing a national agenda of labor rights for all workers. At the forefront of this movement are Latinos, Latinas and immigrants.

The aggressions against the immigrant community by this administration are countless. During the first days of his term, Trump announced the controversial Muslim ban as well as the termination of DACA, the program that protects the “Dreamers” from deportation. Since that announcement, the future of some 800,000 Dreamers has been uncertain. TPS recipients have also been the target of these attacks by Trump, who in an effort to restrict immigration and increase the number of deportations, canceled the Temporary Protection Program (TPS) for 7 of 13 countries. The controversial wall proposed by Trump on the border with Mexico, culminated in the longest partial closure of government in the history of the country, leaving more than 800,000 federal employees without pay for 35 days.

In response, the Dreamers, TPS recipients and the immigrant community have led national organizing campaigns, marches and mobilizations, which have become historic protests in defense of the rights of immigrants and all people. 2019 is the year in which we are exercising power in all spheres, from the streets, to the corridors of Congress.

6. Our Youth and the Future of the Nation

Latino youth represents a plethora of opportunities for our entire nation. We are a community 10 years younger than the national average, which represents many opportunities for an aging country. These figures give a very encouraging picture; they are the future and the present. These numbers translate into votes, civic participation, the creation of jobs, and a tangent change that has already begun to materialize. There has been a growing participation of young Latinos in the country in response to all these attacks, such as the Dreamers, the students of Marjory Stoneman Douglas High School in Parkland Florida, who are fighting for gun control, and the case of several national youth movements mobilizing for better working conditions and opportunities in many unions, along with students who have been part of school ‘walkouts’ for a cause, among other examples.

Difficult times and attacks against our community have also presented spaces of opportunity, unity and action, which have been demonstrated in the last two years.This year, we continue playing a central role in our own future, being an element of hope in creating a nation that has a more inclusive and representative democracy, and that reflects the diversity and priorities of all communities, in addition to projecting a clear vision for the 2020 elections.