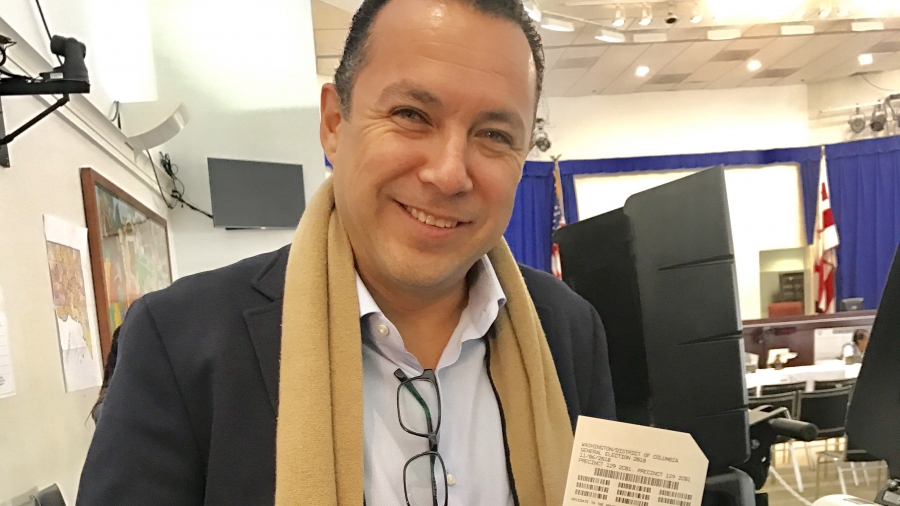 I am an American Citizen, a Latino, an immigrant, and I voted for the first time in this mid-term election. I am not alone. With a myriad of issues deeply affecting our nation, including the increase in hateful rhetoric and violence, constant attacks against minorities, communities across this country should flex their electoral muscle. With the increased anxiety over voter turnout, it is clear that my vote and the votes of other minorities are critical to this November’s outcome.

Voting is personal. It is one of the most direct ways to engage in the democratic process as it is an instrument central to advancing our democracy by injecting our diverse voices and values. I am not taking my vote for granted; no one should take voting for granted. When we look at the history of our nation, we have had leaders and communities that fought hard and even died for this precious right. Until 1920, after a lengthy and serious struggle, women attainted voting rights with the passage of the 19th amendment. African Americans could not fully vote until the Voting Rights Act in 1965, which prohibited racial discrimination in voting and ended practices that had denied African Americans the right to vote. Due to poll tax and voter suppression, most Latinos could not vote until the VRA of 1965 but more importantly until its reauthorization in 1975. Asian Americans could not vote until 1952 because of a federal policy that barred immigrants of Asian descent from becoming U.S. citizens and having access to the right to vote[1]. And the Native American vote was not granted in all states until 1957.

In 2017, I became a U.S. citizen. It was not an easy process; it took me 25 years to be able to attain this right. I was eager to be fully part of society by going to the polls, in the country in which I had lived for most of my life. I promised myself to be a strong civic participant by voting in every single election and to make my voice heard for countless others who cannot participate. I also vowed to continue advocating to make this a better and more inclusive democracy by keep fighting voter suppression and to maintain pressure through all our democratic infrastructures to ensure that all the voices in this nation are taken into account.

Yet, almost half of the voting eligible population do not vote: about 60% in a presidential election vote and 40 percent vote during midterm elections[2]. As a country we have some of the lowest voter turnouts in national elections among developed democracies. According to the Pew Research Center, the United States ranks 26th out of 32 nations for the percentage of people eligible to vote who actually vote. Only 55.7 % of voting-eligible Americans went to the polls in the last presidential election, this could help explain why a person with no qualifications to be President got elected[3]. Elections have consequences.

There could be many reasons to explain low turn out, from voter suppression that make it harder for minorities to participate, to the limitations of working families with more than one job to find time to go to the polls. And, we are fighting to make it easier for everyone to be able to vote. Voter apathy is yet another reason the low turnouts in elections.

With this election, we can finally reverse low turnout and we can help define the destiny of our nation by turning out in large numbers. Political apathy is not an option when so much is at risk. This midterm is a clear referendum on Donald Trump, whose extremist and divisive policies have drastically divided our nation in only two years. Our nation’s historical pillars of justice and economic advancement, which took decades to build to make more diverse, are under attack in this administration. Precious rights such as citizenship (14th amendment), freedom of speech, religious freedoms are on the line. And there are ongoing efforts to limit the rights for LGBTQ communities, immigrants, Muslims and other minorities.

There is no doubt that voting has an impact in the quality of life of our families and communities. In fact, there is a direct correlation between voting and the attention that we receive from politicians in the decision making process, such as investment in our neighborhoods. The more people we have in our communities voting, the more pressure we can put on elected officials. Voting is also important because there could be ballot initiatives that are central for the well being of our cities.

I am optimistic about this election. I have been traveling across this nation and collaborating in voter registration efforts, voter education and getting out the vote. I am enthusiastic about the excitement that I have witnessed. And the initial numbers reflect this, for example in 22 states voters are outpacing 2014 early ballot counts[4]. We also see good news from millennials, a Harvard poll found that this election would be the highest midterm turnout for young voters in at least 32 years[5]. According to Pew research, there is a 14% increase in Latino registered voter interest in the 2018 midterms as compared with the 2014 midterms and also voter enthusiasm is surging among Latinos[6].

Let’s not take our right to vote for granted. On November 6th, we have a choice. We can stay on the sidelines and let others decide our future with the potential to continue to take this nation down a dark and dangerous path for our democracy. Or we can come out in massive numbers to elect leaders who reflect our vision, values and above all hope for this nation. We can choose to prioritize our families, working people and to protect the middle class. The choice is ours. A votar.